Welcome back to another installment of #ASTROUnboxed! This time around we feature industry professional Rukari Austin. He’s the Sr. Community Manager for Gamestop and an avid collector of many things ranging from shoes, consoles, controllers, and many more.

Sometimes you don’t start collecting, it just has a way to find you. That is exactly what happened to Rukari over the years.

I used to think the idea of collecting was silly…until I looked down one day and noticed that I had nearly every retail-released Xbox controller in my hands. Now, I have to have them all. Can’t be left without. I have a status quo to maintain. 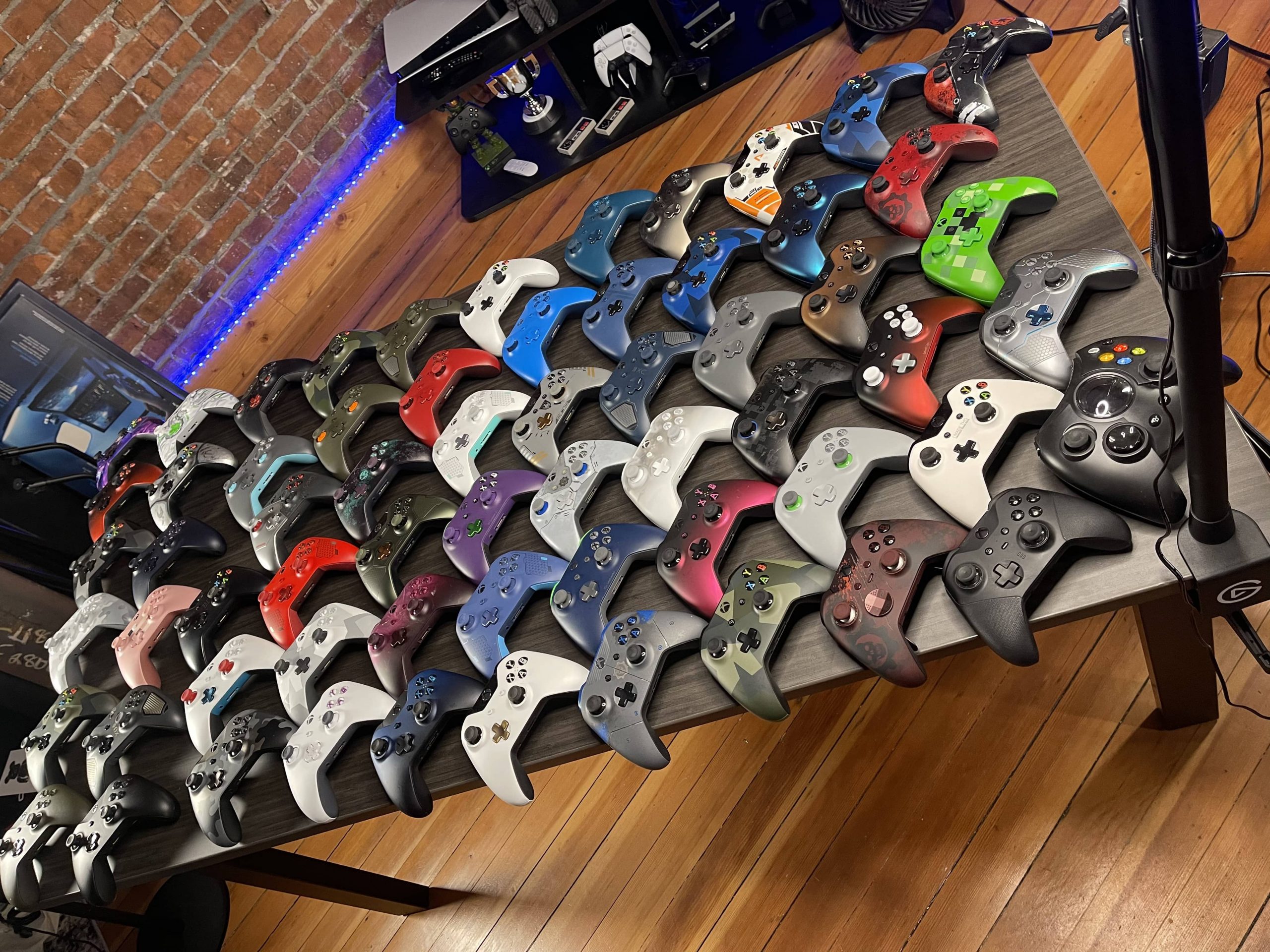 Formerly working for Xbox, Rukari would find himself testing new products for the company. A lot of the testing would involve controllers when they were getting Xbox Design Lab ready for the world. He got to keep some gems for his own collection, even trading rare pins for controllers.

Sometimes I just had a fun piece of swag from a gaming convention that someone on the hardware team had a fancy for. We’d end up trading. Actually, the latter portion is how I really got going. I had pins from Killer Instinct’s release that someone wanted, and the message I got was what controllers do you need to round out your collection? This might have been 2016. Maybe even 2015. Early enough for the addiction to take shape. 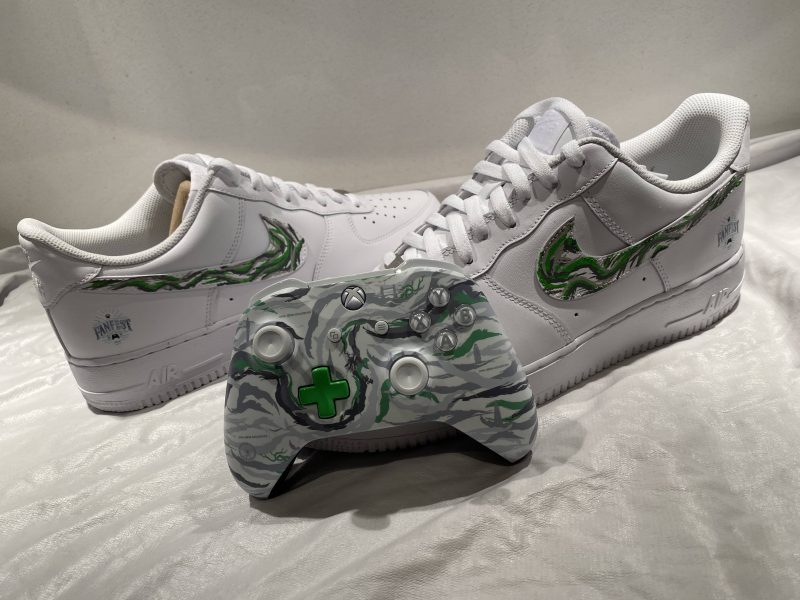 This controller collection has a ton of Xbox history. Multiple game exclusives and some that have never been seen. One of Rukari’s prized possessions is a controller from E3 2017. If you look closely you can there’s something strange going on here. 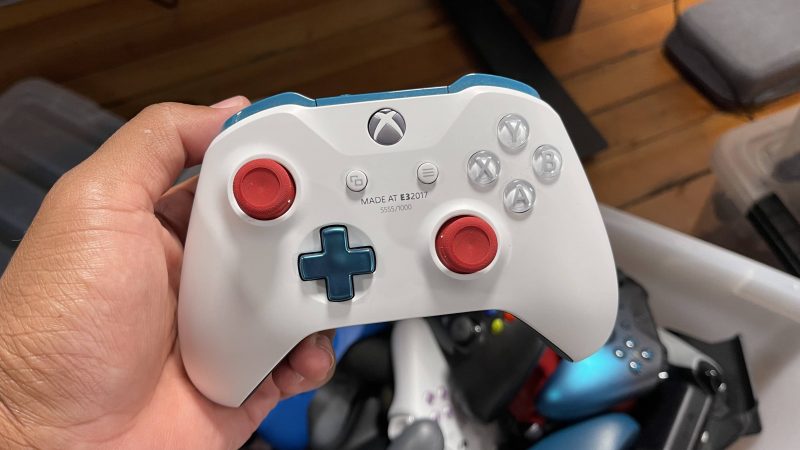 I had a chance to get controllers that most other folks don’t get to see. One of my controllers is from E3 2017. At that event, Xbox let people design their own controller, and it would come printed with “Made At E3 2017” and then the number you got out of the limited run of 1,000 units. Well, I have the number 5555 out of 1,000. They had to test what printing would look like on the controller using the widest available character – 5. So now I’ve got that random, non-existent gem in my clutches.

There are endless stories Rukari can tell about how he obtained such a collection. But there’s one that sticks out and it’s his all-time favorite.

One of my all-time favorites was the employee ship gifts from the Xbox One launch in 2013. Employees got a controller that said “I Made This” on it. Their consoles and controllers were white. It was amazing. Amazing until I posted a picture of it online, and that picture ended up in the number one spot on reddit. Not /r/gaming or /r/Xbox. No, I am talking root. I was so scared that I took my tweet down, but it was easy to tell it was my hand. Technically I was a contractor. Not really supposed to have a console but I figured out how to make it happen. I was worried I was going to be tracked down! 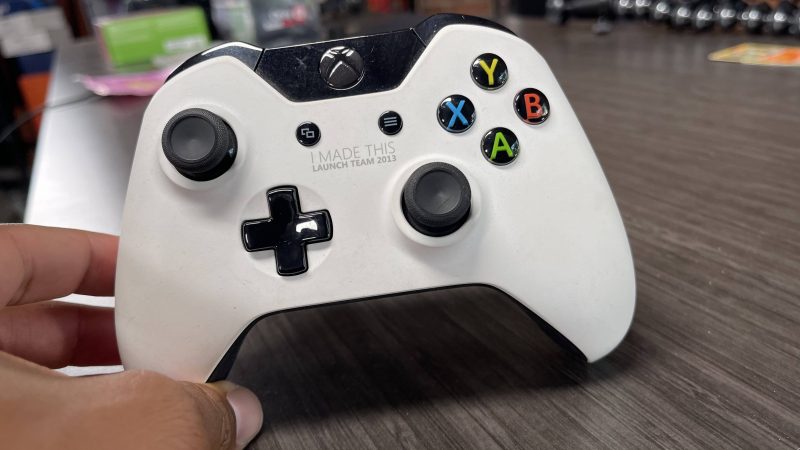 This won’t be the last time you see Rukari here for #ASTROUnboxed. If you think this collection is amazing wait until you see the shoes. Thanks for tuning in to this installment and be on the lookout for future collections to be featured.